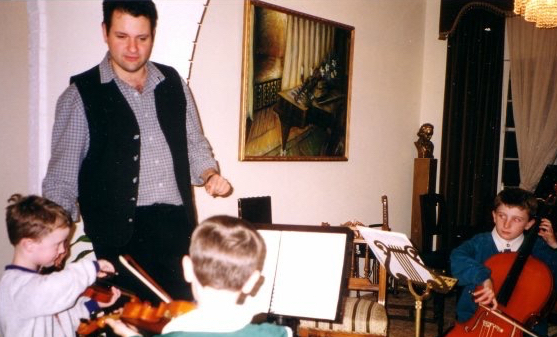 At the age of eight I began to learn how to play a small cello. Alex Zivkovic, an accomplished cellist, would be my teacher for 15 years. In meeting the Zivkovic family, musicians through seven generations in Serbia and now Australia, I was to have a connection to living musical history. In their house Beethoven’s spirit came alive.

As I went through adolescence, temperamental and unsure of the role of music in my life, Alex met me where I was. Most of all, he gave me permission to be patient with myself. He would never be harsh if I hadn’t practiced – the lesson could be a time to practice together!

He would often say ‘when you really want to play to a high level, we will switch pace’. His awareness of the importance of readiness, and knowing what you want, touched me. He respected the stages and seasons of my life before I did.

Our conversations moved between music and life. In the presence of my teacher, I could be my true self. I saw Alex like the older brother I didn’t have and the mentor I could confide in. Years later I would read John O’Donohue’s book Anam Cara about ‘soul friendship’. What I first experienced with Alex, I would later seek out in all my important friendships – a connection founded in trust which could animate the spirit.

When the time came, Alex allowed me to explore improvisation on piano, expressing myself in musical compositions rich in feeling and adolescent drama. There was a freedom present, the liberating sense that through our lessons I was finding who I was.

Alex became a music therapist. He understood the challenges patients face in coming to terms with serious medical conditions. He knew how to create spaces for music to act as a consoling presence.

We would often talk about the stories behind certain pieces we played. Alex told me the story behind Pablo Casals’ ‘Song of the Birds’. Exiled in France over the border from his native Catalonia, Casals would watch the birds fly towards his homeland, awakening depths of loving nostalgia for the place he so loved. As I play the piece now I am lifted into rising heights. Drawn up into the story behind the notes, I can see the birds floating above everything, blissfully unaware of human concerns.

We would often play a piece by Vivaldi, his ‘Concerto for Two Cellos’. Each cello reaches for the other, calling and responding with signature beauty and energy. Listening to the piece, or playing it, you can almost picture Vivaldi the priest, leaving the altar in the middle of Mass to write the divine melody down.

Remembering playing this piece together with Alex, I consider how in such music we reach for the sublime. With each beat, we can create something beautiful. We can console the listener, bring insight to the despairing, and carry joy to the feasting. We can be musicians in an orchestra of praise.

Years later I read Saint Ignatius of Loyola’s one time image of God as the teacher, meeting us where we are, and leading us through new lessons. Alex for me was one such image of the divine, ever labouring for my good.

This was first published as “A Concerted Effort” in the Autumn 2017 edition of Australian Catholics magazine.