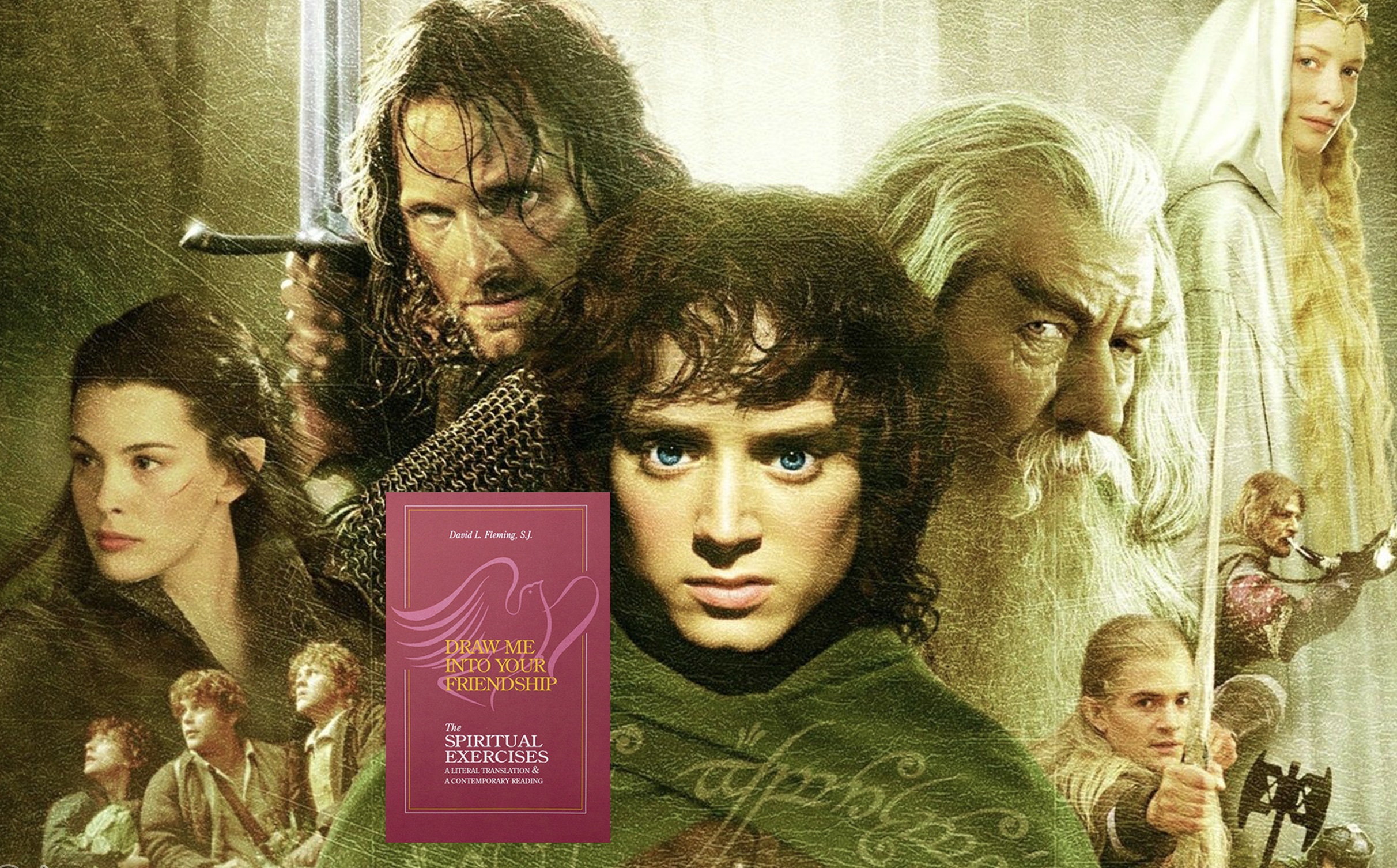 For ten years J. R. R. Tolkien’s The Lord of the Rings (LOTR) moved in my imagination. I began to read The Hobbit when I was 12 years old, and then read each of the three parts of the main series, and then saw the films. The LOTR is a foundational text in my life’s library.

Lord of the Rings and The Long Retreat

When I prayed a thirty day silent retreat with the Spiritual Exercises of Saint Ignatius in July 2011, the Lord of the Rings life-world soon bubbled away in my consciousness. These exercises involve a recipe of “memory, imagination, and will”, and so a spiritual meal enjoyed in God’s presence.

Over the four weeks of the retreat I encountered my memories, hopes, longings, dreams and choices in relation to God’s desires for me. I heard God’s call: “because you are precious in my eyes, and honoured, and I love you” (Isaiah 43:4). I experienced in a felt sense God’s deepening life in me. God’s personal love enfolded me in the silence.

As the retreat progressed, I prayed with various scenes from the life of Jesus as told in the Gospels. I would prayerfully imagine a passage, with all my senses engaged, entering the encounter as a participant or observer. Walking with Jesus from his nativity through his hidden and public lives and into his passion and resurrection, I would stay with words, phrases and images which moved me deeply. In so doing I entered a pattern of relishing and savouring the movements God was bringing about within me. I felt drawn to “taste and see that the Lord is good” (Psalm 34:8).

Each day I entered the imaginative contemplations with my whole self fully engaged. Often my memories of scenes, characters, and journeys from LOTR moved in my heart’s response to the encounter with Jesus. I remembered Frodo’s quest with Sam to overcome The Ring. I remembered the integrity of Strider, on his way to become the future king Aragorn. I remembered Gandalf the Grey and his transforming journey into Gandalf the White.

Each of these three main characters played a role in my prayer. They emerged as part of the retreat dynamic. Frodo, Aragorn and Gandalf helped me meet Jesus the Christ.

Lord of the Rings and Jesus the Christ

In Lord of the Rings, the Fellowship of the Ring is a community of support for the courageous Frodo as he carries a great burden (the Ring). Jesus eases peoples’ burdens and so builds communities of human freedom and responsibility.

In LOTR, the journey of Strider from the edges of the known world to the centre of human life as Aragorn, king, is a profound one. Jesus is born in a backwater on the edges of empire, yet his kingship is revealed in the holy city of Jerusalem among great crowds of peoples. Aragorn is Isildur’s heir, and the last of the line to Elendil, High King of Arnor and Gondor. Jesus is the Christ, “the anointed one”, foretold by the prophets, and “the Lord God will give to him the throne of his ancestor David” (Luke 1:32) .

In Lord of the Rings, Strider/Aragorn wants goodness to emerge in the world, and yet is very aware that this slow work requires patience with self, others and life itself. Jesus lived a hidden life from ages 12-30, when he learnt a trade, went to synagogue, and participated in the life of family and community. Transformation occurs quietly without anyone noticing. The preparation is all.

In LOTR, Gandalf the Grey is transformed after defeating the Balrog deep in the mines of Moria. His wisdom journey involved suffering, but he can smile with delight now. Jesus dies on Good Friday. The joy of his risen life invites us to joy also. He rises with the wounds intact.

Now a further ten years on from that retreat, spiritual exercises continue to offer me renewal. Ultimately the mythic journeys present in the Lord of the Rings were used by God to direct me towards what Saint Ignatius named as “the service and praise of the divine majesty”. And so to fullness of life in God’s presence.